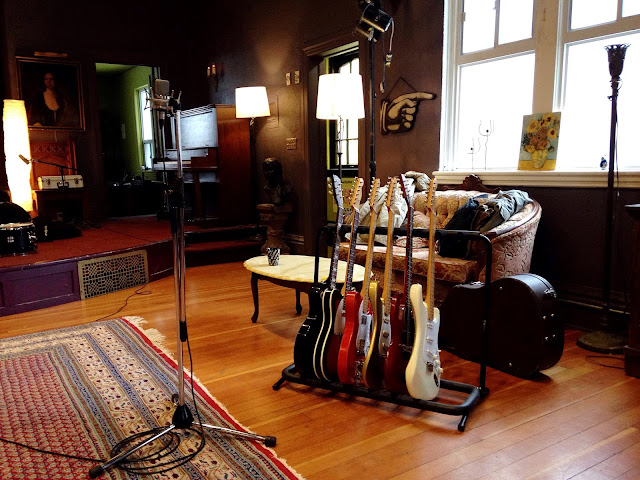 And here we are, the last official day of 2017. Seems fitting to write a year-end wrap up entry before leaving for our next adventure.

2017 was a productive year for us. Productive is not a glamorous word. It's not a word that makes me giddy with excitement or kickstarts the mind to dream of new possibilities. Being productive is a slow grind. It's the tiny increments gained and boxes checked off one by one. It's only at the end of a productive cycle that we can stand back and marvel at the big picture with all the colours filled in and highlights added; and it's perhaps at this moment that productivity becomes a thing of beauty.

We put out a brand new album in October. It was a year and a half in the making, beginning in the summer of 2016 during our two-month stay on Vancouver Island. Most of the songs were written while we camped in the hay field at Birds Eye Cove Farm in Maple Bay.

Once we got back to Ontario that fall and settled into a new routine, we began work on fleshing out the new songs - adding arrangements and experimenting with new sounds. Once everything felt "complete" we knew it was time to book the studio.

We spent a few days at Catherine North Studio's in Hamilton, Ontario. Working with Adam Cannon (drummer extraordinaire) and Lauren Campbell (my extremely-talented sister) to create the bed tracks for the seven songs. The studio is housed in an old church and it was an amazing place to bring the album to life. Once we had the songs 90% in the can, we booked a day at The Woodshed Studio (home of Blue Rodeo) in Toronto and had Christine Bougie lay down some super-slick lap steel parts; and Albert Carrero adding some smokin' guitar licks. We are extremely lucky to have such uber-talented friends (hashtag blessed).

The following months were filled with mixing and mastering, taking photos and shooting the video for the single (hats off to Matthew Waring for his awesome skills behind the camera), creating the album artwork, booking the tour and finally putting everything together for what would become "Cheap Gin".

Once we sat back and listened to the album in its completed state it became quite evident that it was an audible snapshot of our journey across the country. Each song is filled with nuances of all the places we visited during our trek – from the deep south to the dusty desert, it was all there; and with each listen I was transported back to all my favourite places. It's funny that we never really noticed it until they were all together as a package.

At the same time during the recording and album production, we bought a house... in Alberta. It wasn't something that we had planned on and it all happened rather quickly. It's funny how being on the road and travelling, despite how much at-home we felt in the RV, still made us long for a place of our own (that was not on wheels). A place where we could return to after a long journey; where my second-favourite coffee mugs lived in cupboards and comfy couches sat waiting for tired bodies to lounge on. We tossed around the idea of moving west - either Saskatchewan or Alberta - where gas was cheaper, as were the houses and overall cost of living. We found a house on MLS (or whatever if goes by now) and as we looked at the pictures and googled the town, it seemed to check off all the boxes. So, we put in a conditional offer and once it was accepted Brad jumped on a plane and went to have a look. He flew into Edmonton on a Tuesday morning and was back in Toronto by midnight. The house was as good as we had hoped for and we signed on the line, closing date was the first of March. It wasn't until the first weekend of May that we both flew out and I saw our new house for the first time. It was a surreal moment, to say the least.

We made the plan to move west in September, while touring the new album across Canada at the same time. We left Ontario the week after Labour Day and got as far as Brandon, MB, when the wheels fell off. The RV motor essentially blew-up (not literally, but it was done. TOAST). We called CAA and the biggest tow truck I ever did see, hooked up old Winnie and pulled her into Brandon; where she would sit for almost 3 months (although, at the time we thought it would only be 2-3 weeks). Because we were moving, we had our van and so we left the RV and continued on to Alberta and then on to BC for a string of dates on the island. As we were making our way back from BC, the van started to show the early signs of a failing motor (not again!!!). We nursed it back home to Alberta and were forced to buy another van so we could get around to the rest of the shows we had to play until Christmas. We had no downtime in which we could be without a vehicle, so we picked up a cheap van from a lady in a nearby rural hamlet. The van needed new wheel barings and ball joints to pass the mild safety testing but funds were extremely low, hence our search for a "cheap" van...  So Brad took it upon himself to carry out the repairs DIY-style. It was also during this time that we had our first extreme cold snap in Alberta (-20°C) for a week. But hats off to Brad (and our helpful, tool-baring neighbours), he fixed it all in our unheated garage, while suffering some frostbit I'm sure.

It wasn't until mid-November that we made the return 11-hr drive to Brandon to pick up our old girl - outfitted with a brand-new motor (to the tune of almost $8000... #fack) and brought her home. Up until that time, I never felt settled. Half of our stuff was still with the RV in Brandon and I was dreading that trip - but once we got back and Winnie was parked out front of the house, everything finally felt right. We get up every morning, open the curtains and throw a wave to the old girl. I'm sure our neighbours love that we take up 1/2 of the road now, lol.

So here I sit, in our new home in a rural village east of Edmonton, Alberta. The sun is finally streaming in through the window despite it being -800°C outside and am reflecting on our productive year of tiny increments that all compounded to lead us here. We play our final show of 2017 tonight - Happy New Year! - and on Tuesday we depart for our 2018 US tour (dates here). I cannot wait to get back on the road, to log the miles and dive head first into the warm southern sun.

Here's to a prosperous new year!
We'll see ya down the road,
-a.