It’s day five of being stranded at the Flying J truck stop just south of the town of Gorman in California. Brad is crushing his was through a roll of electrical tape as he slowly erases the frustrating problems of the past four days. But lets back up shall we, as I bet your just dying to find out how this became our fate.

Late Friday morning we left Paso Robles after a wonderful two shows in the area, life was great and we were on our way to Ojai for another show that evening. We stopped at the McDonalds just before jumping on the I-5 for a breakfast burrito and a shared beer in the parking lot. An hour later we pulled into a highway rest stop to dump the tanks and fill up with fresh water for the next few days. The tank dump was successful and I took Hank and Winnie over to the grass to dump their own tanks. I glanced back at Brad, as he sat in the driver seat and had a puzzling look on his face… “Did you turn on any lights while we were parked?” he called out, to which I reply I hadn’t, and that’s when I knew something was very wrong. The Winnie was stone-cold dead, completely void of electrical in the dash and therefor unable to start. It was 1:30pm, the Friday of a long weekend here in the states and we were lifeless at the dump station completely blocking the facilities for anyone else to use. While Brad opened up the dog house to the engine and tried to figure out what was going on, a couple in a truck and fifth wheel pulled up behind us. I jumped out and gave them the scoop, to which they replied they only needed the water hook-ups and proceeded to pull around us. After they had filled up, them came over to see if they could help. In the end there was nothing they could do, so Brad and this couple pushed Winnie over to the curb and out of the way, while I sat in the driver seat and steered.

For nearly six hours, Brad (completely covered in black grime and oil) poked around the engine and under the dash trying to find a broken connection and finally called it quits - it was dark and starting to get cold and we had to make the call to cancel our show for that night. Luckily our CAA membership came to good use again and after a 3-hour wait, our tow truck finally arrived. We all piled in the cab - tow truck driver, Brad, myself, Winnie and Hank, and drove no more than 2 miles up the road to the Flying J truck stop. The driver placed us down in the back of the slightly sloped lot, and we went to bed shortly after. 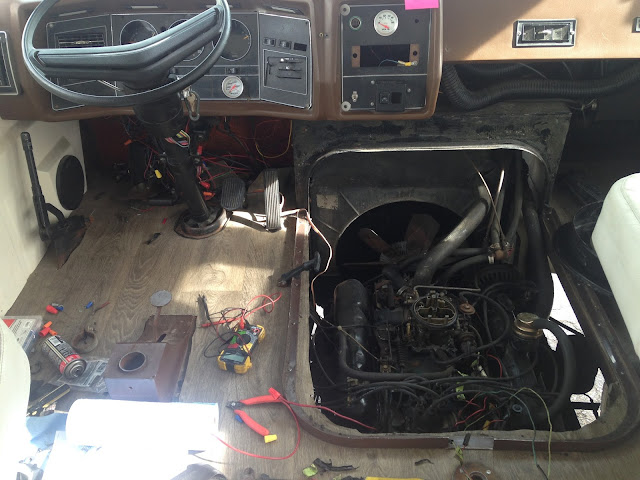 The next morning, Brad opened everything back up and after a couple more hours felt the problem was out of his hands. He walked over to Napa Auto Parts to see if the parts people may know anyone in the area we could call. As Brad tells it, he was at the counter asking the dude if he knew anyone who might be able to come out to the RV on a mobile service call and as they guy struggled to think of someone the door to the parts store opened and in walked a late 20-something guy - the parts guy looked at Brad and simply said “That guy”.

An hour later, Shane pulled up in front of the RV in a service van and spent the next five and a half hours tracing wires, testing power sources, switching out components and desperately trying to solve this crazy puzzle as to why we had no 12V power to the dash and ignition. At quitting time, Shane concluded there were two parts in the steering column that must be shot and placed an order that would not be delivered until the following day (Sunday). He left that evening assuring us he’d be back tomorrow to finish the work (on his own time) and we left it at that. Both Brad and I were exhausted and frustrated, and not happy that we had to cancel our show for that evening as well - on top of it all, we were spending a second night at the Flying J, listening to the chugging engines all night of the big rigs, on a perpetual tilt (since 1976 Winnebagos did not come equipped with levelling jacks). I should also point out that we had no fresh water on board and any water we did use came from two jugs we kept filling up in the Flying J bathrooms.

Sunday morning we got up and tried our best to think positive. The parts would arrive and hopefully Shane would have us back on the road by mid-afternoon. At noon, we got a call… the parts store ordered the wrong parts. Shane came by to check on us and gave us two of the biggest bottles of Stella Artois that I have ever seen. We spent the rest of the day staring out the front window, watching the ever rotating line-up of trucks and RV’s at the gas pumps. We went to bed that night feeling quite defeated and sad.

Monday morning nether one of us wanted to get out of bed, but the “stay positive” pep talk was issued, clean clothes were put on and today was the day we were getting the fuck out of here. Watching the hours tic by, it wasn’t until around 4pm that Shane appeared with the new wiring harness and ignition set-up – tonight we were getting this done. It didn’t take more than an hour to figure out that the wiring harness was not going to work. Somewhere in the past 42 years, things were changed and the OEM replacement was not going to work. We were all done. Our food was running low (the dogs enjoyed a home-cooked meal of rice and potatoes - to which they appeared to actually enjoy) and we ordered a pizza from the Flying J (without much hope it would be any good - but to our surprise was fantastic) and proceeded to drink the slightly chilled beers from the emptying fridge. We fell asleep sometime around 9pm - day four at the Flying J was coming to an close, and we didn’t know if there would ever be an end in sight. 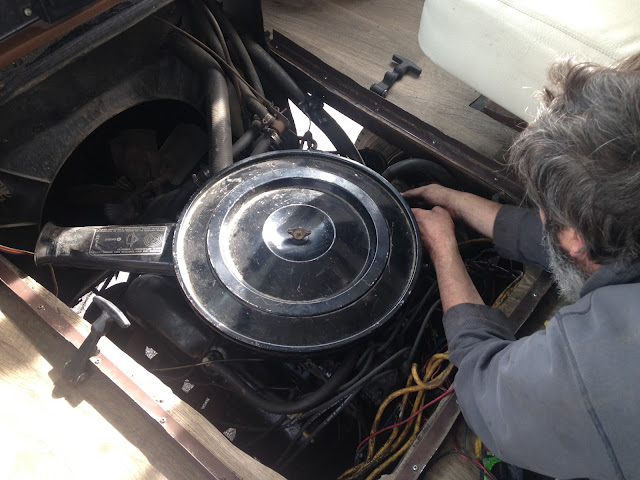 Tuesday morning we brewed up our last pot of coffee and split the last of the yogurt for breakfast. The dogs ate the leftover rice and potatoes and we walked over to the Flying J to fill up on water for dishes and teeth brushing. This was it, the end. I told Brad that today was the day - it had to be on account that we had nothing left and that I wasn’t going to eat any more gas station food. Brad decided he was going to take another crack at the wiring - they must have missed something. With Jay (Brad’s bother-in-law and superstar mechanic) on the speaker phone he traced his way through every wire and old connection, unearthing looms of old wiring covered in 1970’s electrical tape. I was sitting on the chair next to the engine and jumped when the crack of a live-powered wire hit metal and sprung to life. Brad and I both just looked at each other and he went to work fishing for the wire. Up from the depths of the motor compartment, Brad exposed a red wire that appeared to have a clean cut and with Jay’s help, spent the next few minutes trying to figure out what it could have been connected to. And then the moment of clarity appeared and with a trial of holding this powered wire to a primitive-looking connection, Brad turned the key and Winnie came to life. Sweet Baby Jesus - she was alive. We tried it a few times just to make sure it wasn’t a complete fluke and then we celebrated with re-heated pizza and a shared can of beer. Brad spent the next 2 hours re-taping all the old connections and exposed wire and by 4pm we were pulling out of the parking lot. Our 124-hour staycation at the Flying J was finally over.
Labels: #winnebago #tourlife #tour #flyingJ #rvlife #rving #vintagewinnebao #california