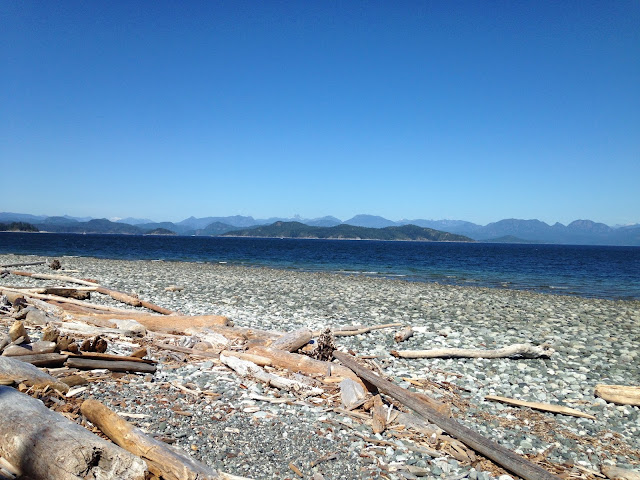 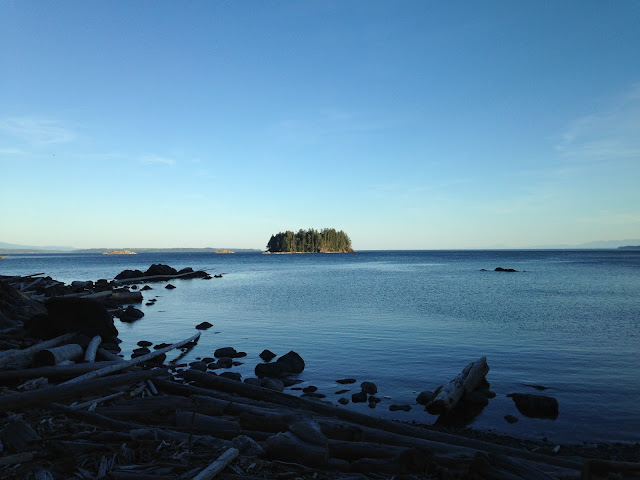 We left Quadra on Friday morning (for the second time), bound for mainland Vancouver. Two ferry rides later we arrived, it was mid-day and the sun was in full affect. Forty-plus degrees and bumper-to-bumper traffic was certainly taking its toll on all of us, including the Winnie. We were hot and we were tired but little did we know our day was going to get much worse.

By the time we pulled into the brewery parking lot, we were all over-heated and wishing we were anywhere but in the middle of the city. We cleaned ourselves up as best we could and went to work. The show went by quickly and was a lot of fun (the beer was top shelf too). Around 11pm we pulled out of the (still hot and muggy) parking lot and hit the highway for the city limits. Hank had been having a really rough time with the heat and by the time we got to the rest area near Abbotsford we knew something was frighteningly wrong. His breathing was very laboured and he was in panic-mode. A phone call was made and back to the suburbs we went, to an all-night emergency vet clinic. X-rays showed a near complete block of his windpipe and pending failure of his lungs. The stress of his extreme panting had made his throat swell shut and he was not far from death. The vet team sedated him and hooked him up to a breathing machine, the only thing that could save him at that point. He remained sedated and intubated all night while we tried to sleep in parking lot hoping he would survive the night. At 7am he was tentatively taken of the breathing tube so that we could transport him to another vet for surgery to remove the swollen tissue. He was prepped for surgery around noon and by 4pm he was ready to be picked up from recovery. He was conscious, calm and breathing amazingly clear – in fact he had never sounded so good. We spent the next few hours in the shaded parking lot of the vet clinic listening to the final Hip concert on CBC, trying to collect our thoughts and re-group. The only plan was to wait for the heat of the day and rush hour traffic to pass before we set out on the move again. With the help of some amazing people, we all survived one of the most stressful 24hrs of our lives. 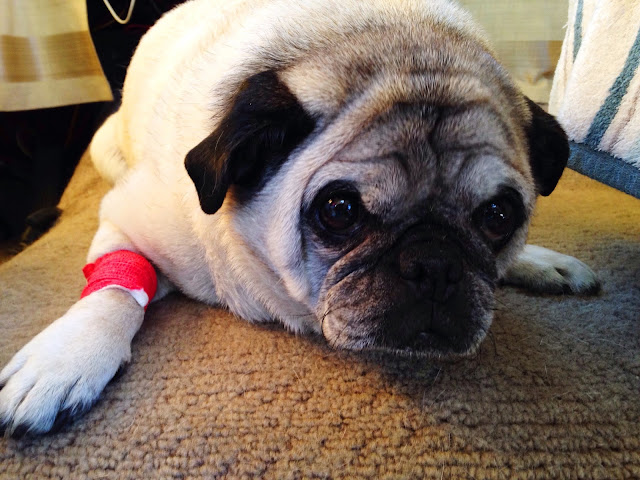 Over the next few days we made our way across the beautiful interior and arrived in Nelson. I loved Nelson – what a great town! We spent two nights at a provincial park on the shores of Lake Kootenay and it was exactly what we needed. It was sunny and warm and the beach was dog-friendly; so there we sat with our chairs in the water, beer in hand while Hank and Winnie attempted to drink the lake dry. We played a show at The Royal and the place was hopin’. It was such a great night and the perfect way to cap off our time in Nelson. We pulled out of town after the gig to gain some distance for the following nights show in Banff (just over 500kms away – which translates to roughly 8hrs of drive time for us). 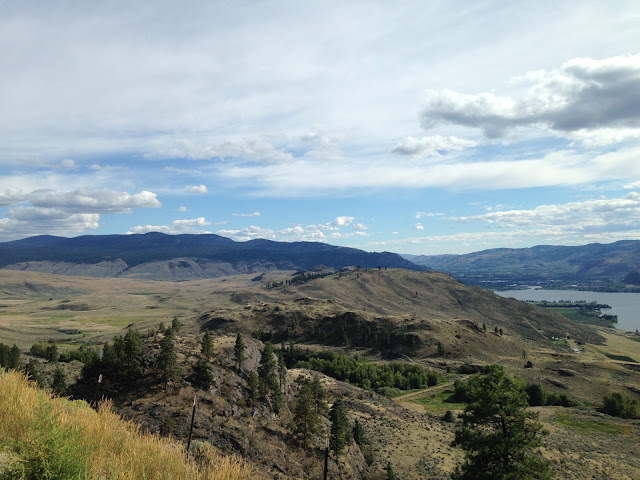 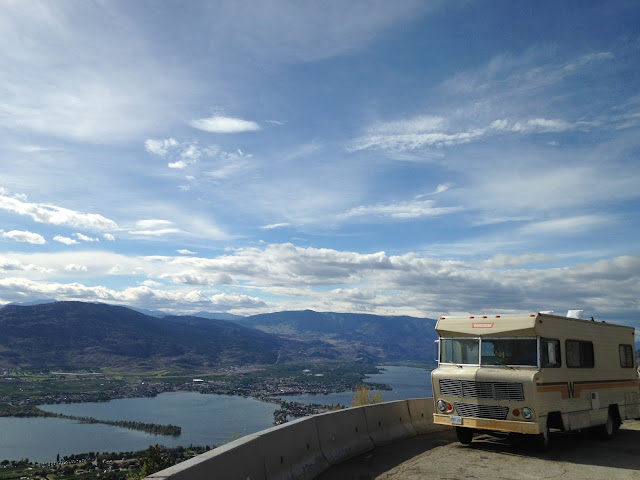 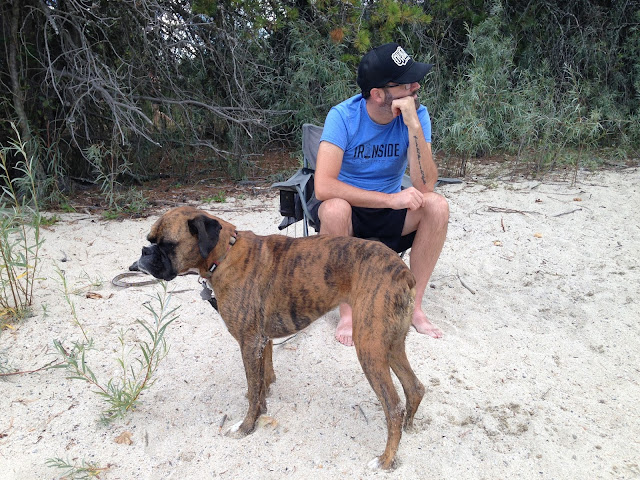 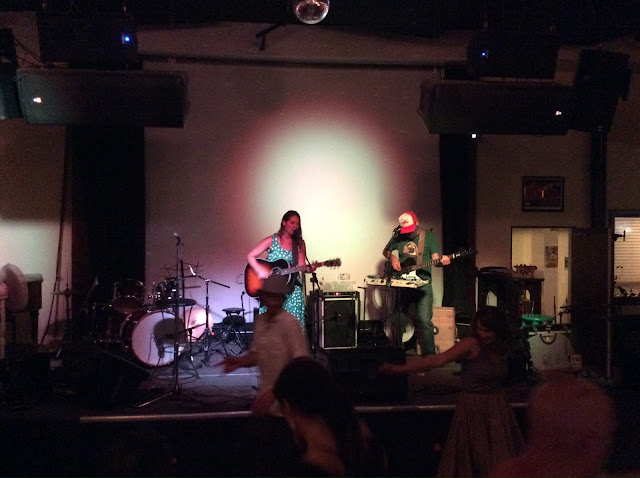 And then we were in Alberta…
Banff was crazy busy, despite my impression that this was a winter spot. We made the drive through the downtown, past all the high-profile shops and waded through the sea of Asian tour groups. Our destination was the Fairmont Banff Springs (the castle hotel) where we were spending the next three evenings playing in the lobby bar. We were overwhelmed with the concern of trying to find a place to hide the Winnie, out of the sight of the high-end guests that shuffled about the gorgeous hotel property. We were left with only one option, to tuck away in the trees down near the tennis courts and overflow parking. Our three nights of shows flew by, despite the weather being cold and wet – which made for some chipper sleeping conditions in the RV. All in all we had a great time. 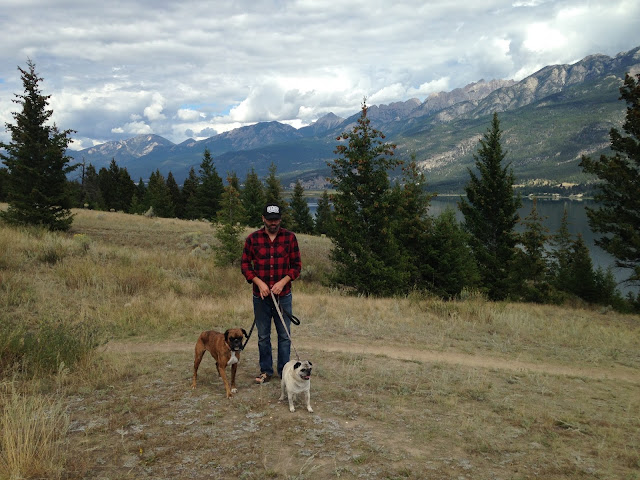 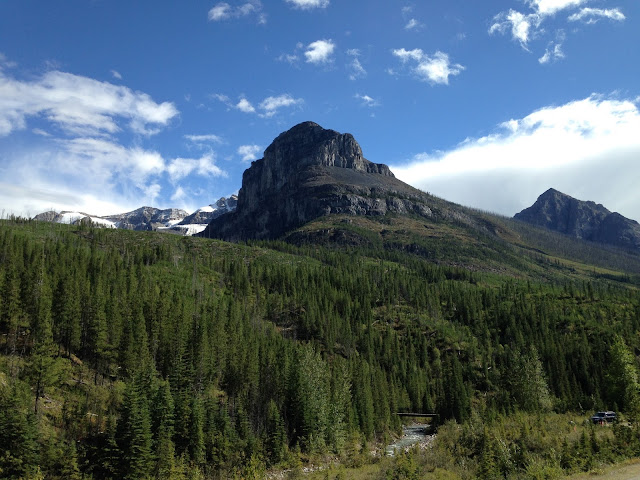 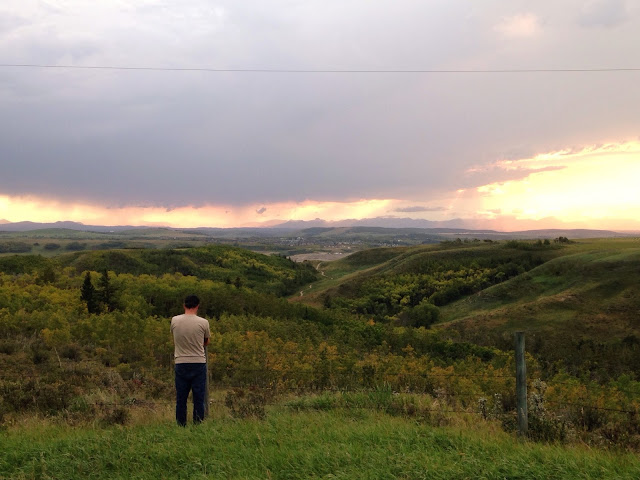 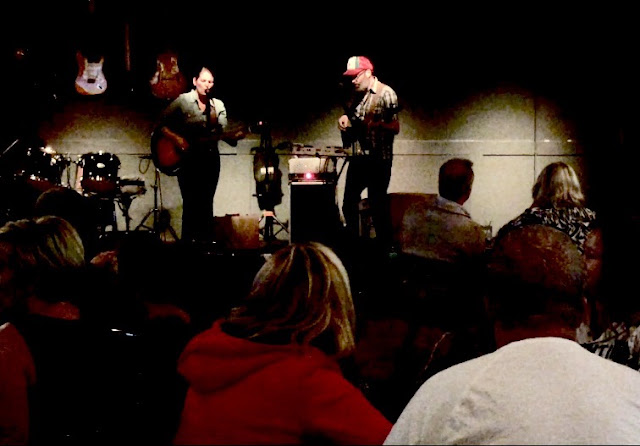 We arrived in central Alberta with a few days to explore before a show in Edmonton. We enjoyed a brief run-in with Alberta Parks Enforcement after an amazing boondock at Big Hill Springs park and had a great visit with some family in the Cochrane area. September 1st we played our first show in Edmonton and spent the night at the local Walmart. The next day we had a fortuitous visit to the famed West Edmonton Mall. The mall itself was impressively large and filled with every kind of store one could imagine – including a skating rink and water park, complete with a massive wave pool – right inside the mall… crazy. We got our exercise for the day after one solid lap and decided that was enough retail therapy to last us for quite a while. Trying to find the exit was another adventure all in itself, but it wasn’t long before we were outside in the brisk Edmonton air. As we turned the last corner of the building and spotted the RV we noticed two long-haired dudes hanging about, having a good look at ol’Winnie. We stopped for a moment and stayed at a distance as to not interrupt their inspection. Finally we decided to approach, as we could see Winnie (the dog) starting to get a little suspicious of these peering strangers.

Dans: Is this yours?
Brad: Indeed it is.
Dans: Wow man, that’s awesome. I just bought one of these…

And so it began, a conversation that would last nearly 30 minutes in the parking lot of the mall. It’s crazy how many folks we’ve met and befriended all because of a shared fondness of the quirky 1970’s Winnebagos.

We finally parted ways with an agreement that we may see each other later that evening at our show at the Needle Vinyl Tavern. The gig went extremely well – what an awesome place! As planned, our new friends sat in the audience and cheered us on. We sat for drinks after the show and had a great time chatting and learning more about each other. After drinks we stopped in at a ‘world famous’ donair spot that smelled so bad of onion that we were all crying while eating. In the parking lot after gorging ourselves, Dans extended the invitation to camp on his property out near Stony Plain. Naturally we took him up and caravanned out past the city limits. 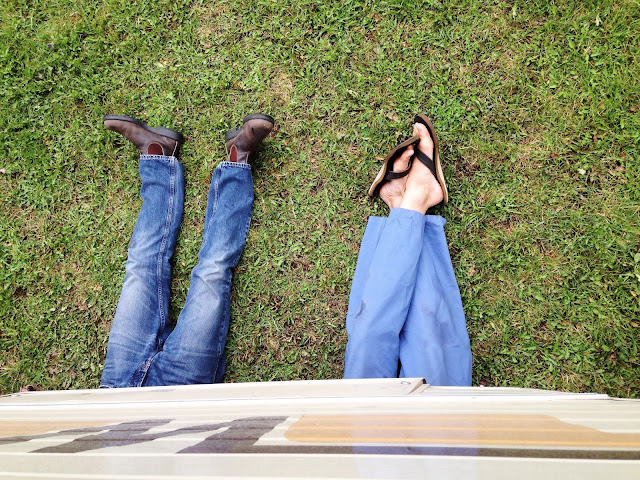 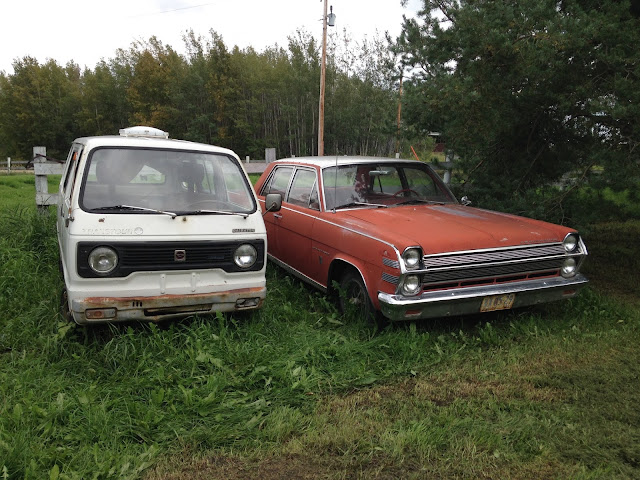 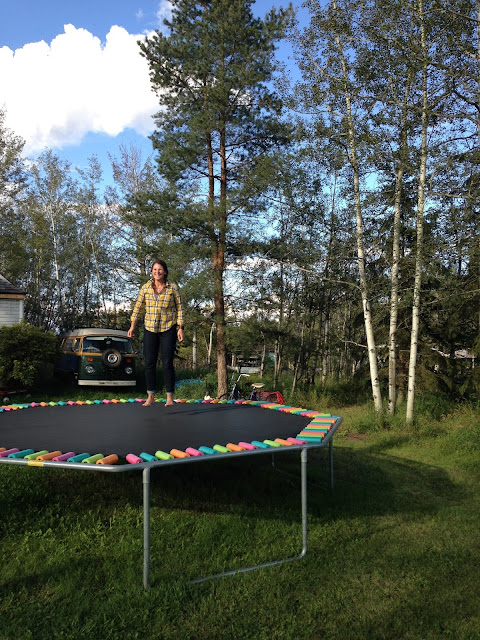 The next few days were spent enjoying the company and hospitality of our new friends, while doing some minor repairs and cleanup on the Winnie. There was also a great deal of conversation happening about what the next few weeks would bring. On the heels of Hank’s near-death emergency and our ever-shrinking savings we began to consider all options. With very heavy hearts but clarity in our minds we decided to cut the final three weeks of the tour, playing our last show in Edmonton on September 3rd. We would head back east from there. 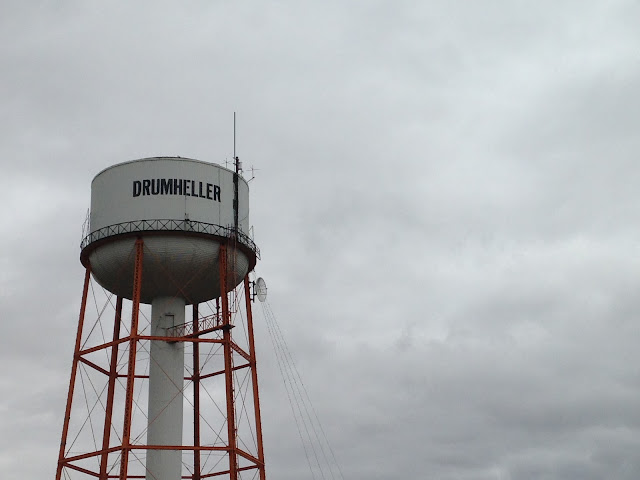 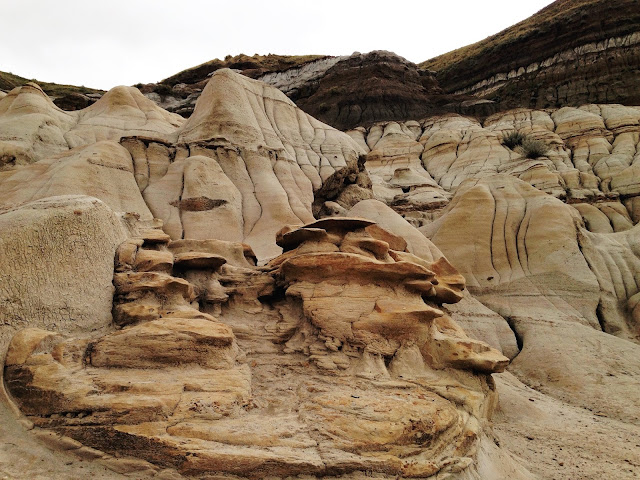 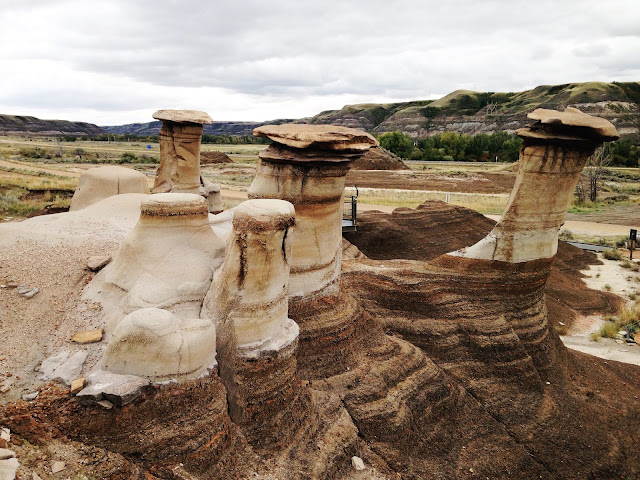 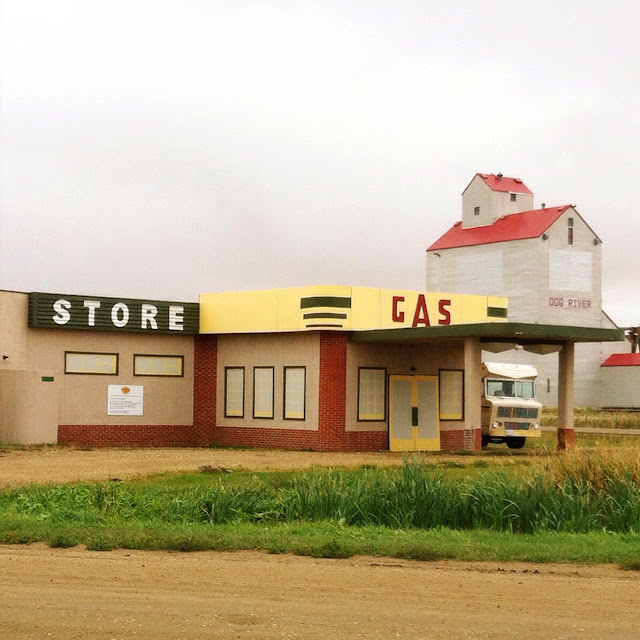 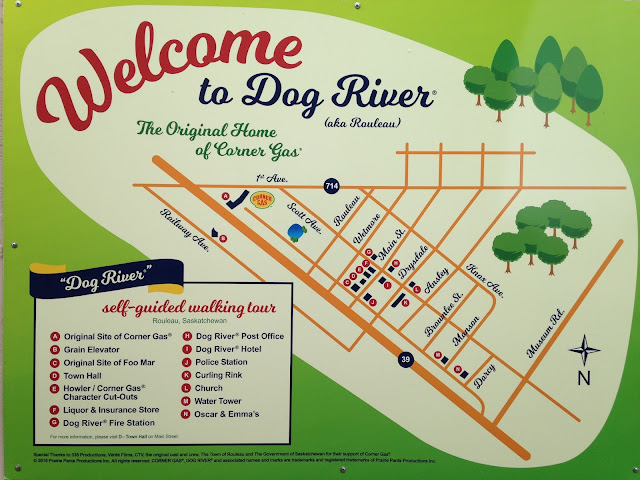 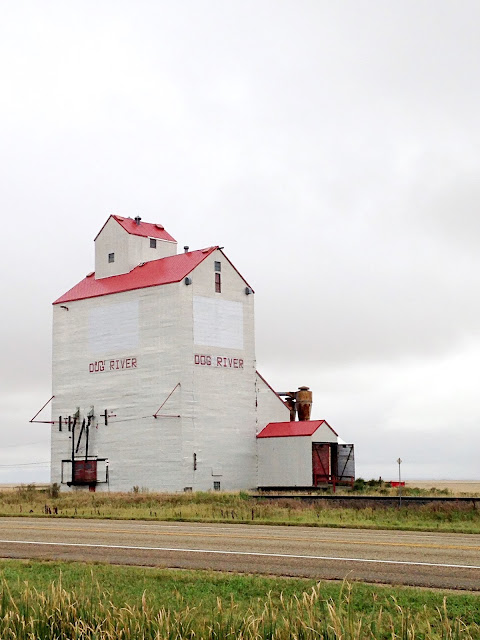 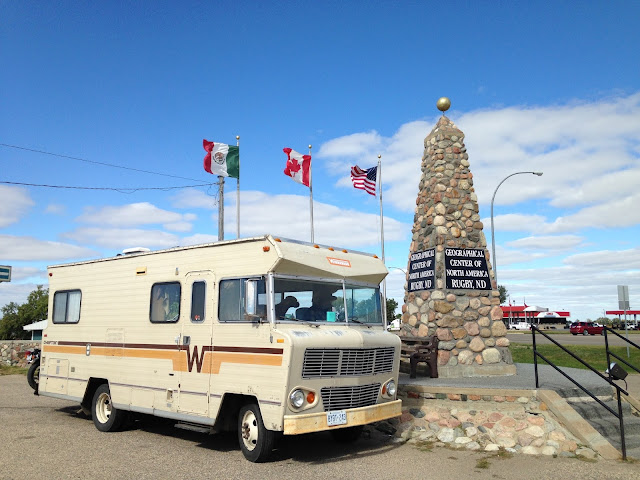 The trek took us four days and we returned to Ontario just in time to surprise Amy’s mom for her birthday. We immediately got settled and put the wheels in motion for the recording of our next album! The plan is to work, write, record and gig until late summer when we will release our newest musical creation and hit the road again.