In no time flat, you staked a claim on my heart and I was a goner... 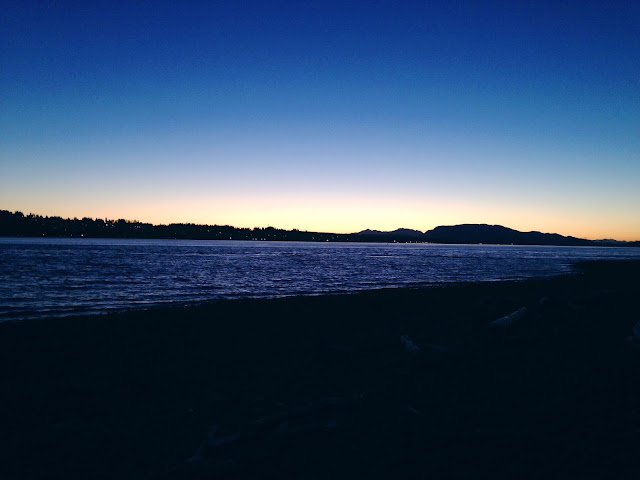 Four amazing days of hard R’s and long A’s, strange conversations around a midnight bonfire, and one incredibly crazy water taxi ride. All because of one serendipitous meeting in Midland last November.

Tuesday afternoon we left Duncan and made the 4-hour trek up-island to Campbell River – a stunningly picturesque town where the brilliant blue seascape meets snowcapped mountains in the distance. We strolled around the bustling downtown before making our way to the ferry terminal where we would catch the boat for Quadra Island. The ferry ride was no more than 20 minutes and we were soon bombing around the twisty island roads. Following a recommendation, we made a stop at the Rebecca Spit Provincial Park, where we found a great ocean-front spot to park the Winnie and make some dinner, all while taking in the incredible vistas. 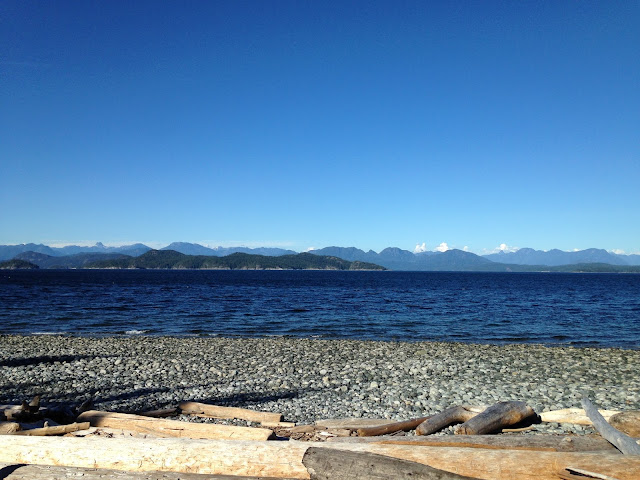 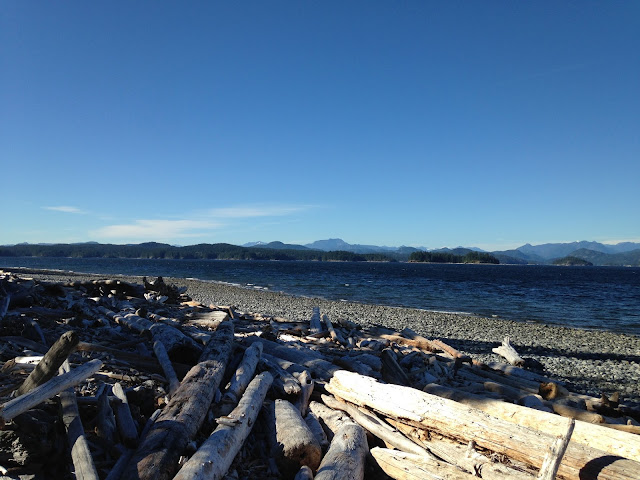 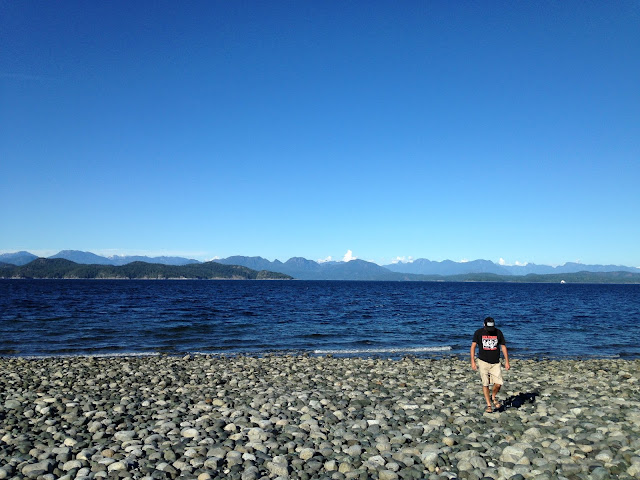 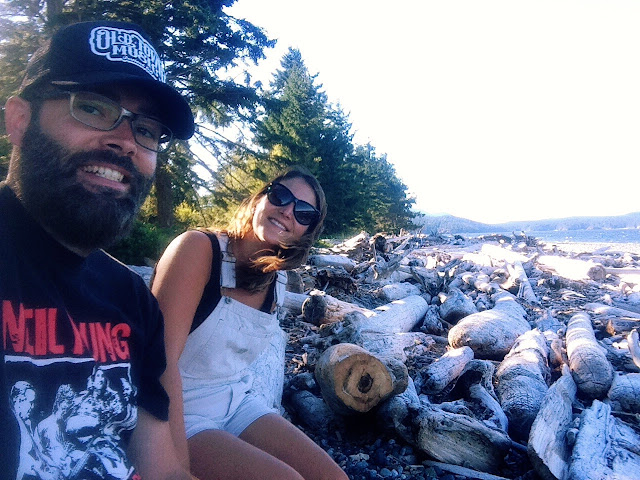 After dinner and a round of throwing stones at driftwood logs, we made our way to Joyce Road where a man named Bruce would be expecting us.

And just like that we found a place to park the Winnie, hooked up some hydro and joined Bruce and Barb in their beautiful cabin for drinks and stories. We explained how we met Troy last November at a show back in Ontario and that when we arrived in BC we exchanged emails and now here we were. Troy was back in Campbell River for the evening (which we didn’t know until were already on the island) and would be returning the next day. 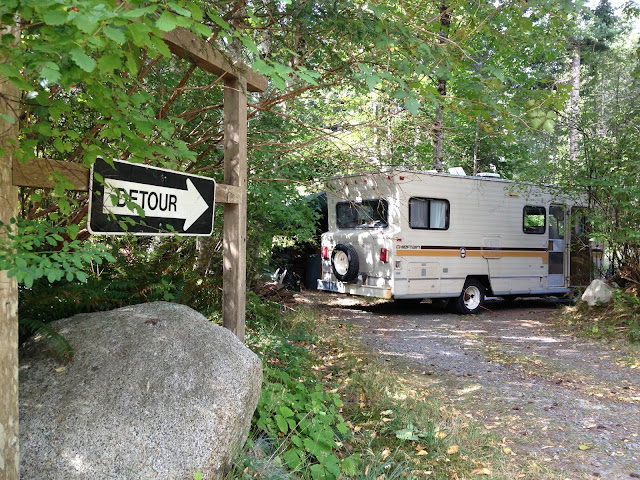 The next afternoon we took a hike down to the lighthouse and walked along the rocky beach. And that’s when I felt it – the lump in my chest. The feeling I get when I am somewhere I never want to leave. I had it mildly in New Mexico but this was a bigger pull and it came on quick. When we got back to El Rancho Lamont we freshened up and joined Bruce and Barb for cocktails and were soon joined Troy. Conversations flowed, the evening grew on and it wasn’t long before we were packing it in.

The following day we planned to head to the beach for some SUPing but the crazy wind kiboshed that. We hung out, drank beers and made plans for the evening. After dinner the three of us headed out to April Point to catch the water taxi over to Painters Lodge (across the channel) and get our drink on. The taxi over was a little choppy but nothing compared to the return voyage – see video below.

After returning to the island we headed to the local Inn/Pub and caught some live music, then trekked over to the Legion for a quadrathon of athletics in the form of extreme ping-pong, darts, foosball and air hockey. We closed the place down and found ourselves back at Casa Troy’s for an epic Ween listening party before calling it a night – an adventure packed and glorious one at that. 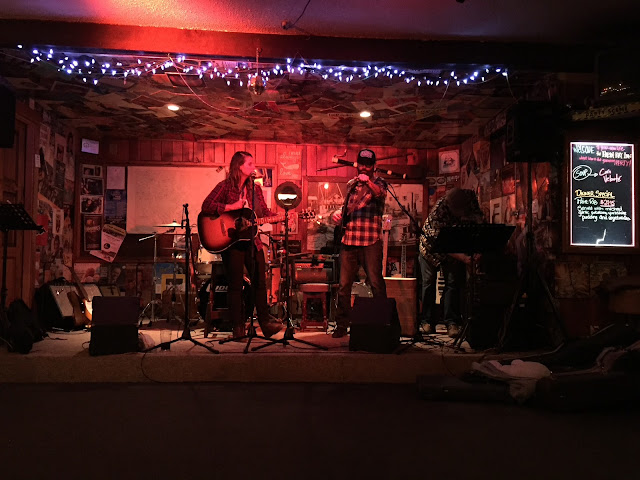 Saturday evening we headed back down to the Pub for open mic night (minus one didgeridoo). Brad and I awaited our turn and by the time we took the stage the place was hoppin’. We stayed and watched a few more acts before heading out to a party that everyone kept insisting we should go to. We parked the car at the end of a very dark road and walked the driveway past the house towards the barn where there was a Dj dropping some serious beats. However, when we stepped inside, we quickly realized there was no one else there – just the DJ and a bunch of brightly coloured lights. We made our way back up the driveway and came upon an empty bonfire, so we plopped ourselves down and started into the linguistic breakdown of the West coast accent. Folks slowly started joining us and it wasn’t long before we had a full group around the fire. Somebody pulled out a guitar, songs were sung, and I swear to god I wondered if they were filming an “Experience BC” commercial - aside from the guy who wore a corduroy blazer without a shirt underneath (Creepy Cole as he would later be referred to as). And just as quick as the group swelled, we picked our time and made our discreet exit – it was almost 2 am. The stars above the island are incredible - the expansive sky is littered with them, and when we arrived back at T’s we stood on the deck while side two of Rumours played and just looked up. It was officially my birthday and I was officially in love with this place.

And then it was Sunday. Sometime mid-morning I looked out the front window and spotted an enormous bubble floating in the breeze, then another one, followed by another one. There was T with a crazy bubble-making, string-and-stick assembly (not the least bit Forrest Gumpy) creating these beautiful mammoth bubbles. I couldn’t make this stuff up if I tried, it was a thousand times awesome. So there we sat in our folding chairs (completely sober), watching these techicoloured orbs floating in the breeze  – only on Quadra. 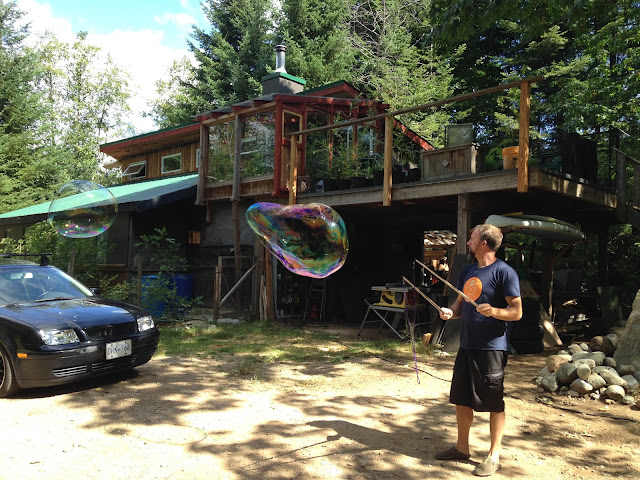 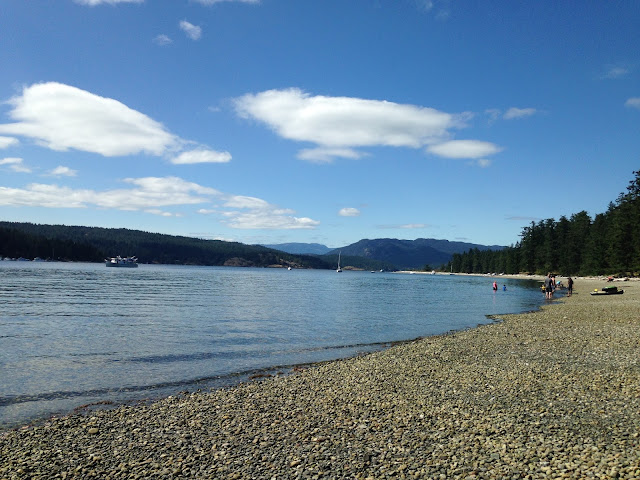 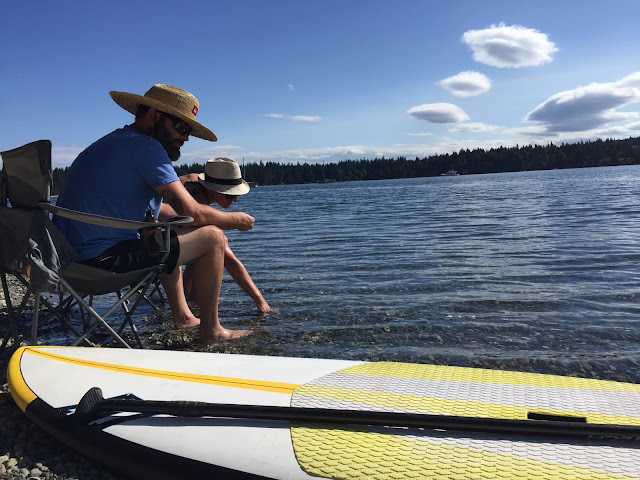 After the bubbles, we packed up the SUPs and made our way to the beach. It was a gorgeous sunny day and the bay was calm. Brad and T paddled out and I was more than happy to perch my chair in the shallow water and take in the views.

We got back to the house just before 6pm and quickly got ourselves organized for our departure on the 7pm ferry back to Campbell River (and back to real life). I could feel the lump my throat, the one that comes up when I’m about to cry - the thought of leaving was breakin' my heart. But alas, we said our goodbyes, boarded the boat and were back on the TransCan heading southbound.