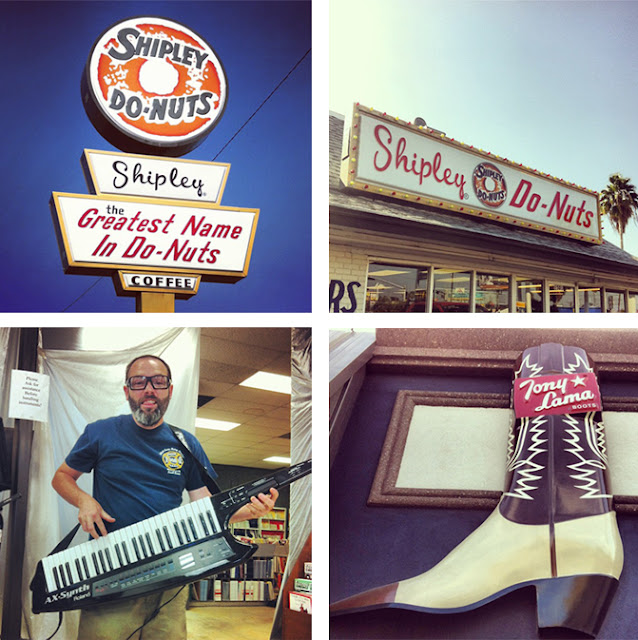 This past week went by fairly quickly, and without having any structured timetable, the days just seem to bleed into one another.

We spent most of the week pounding the pavement, soliciting ourselves to almost every dive bar and roadhouse that books live music. By Thursday we were feeling pretty deflated, as we kept coming up empty handed. Most establishments book their entire season in the fall, and don’t seem too keen to take a chance on a couple of “kids” – especially when these “kids” don’t play exclusive old-school country music. But by Thursday afternoon, a little light was shed and an email came in from the entertainment booker from a little coffee bar (where the young’uns seem to go), saying she’d like to book us for a show. YAY!!! And so, it is with great pleasure, that I can finally announce our first Texas show – Friday Feb. 8th at Jitterz. We celebrated our inaugural gig with an afternoon trip to Shipley's Donuts. Be. Still. My. Heart. From the moment my eyes met the sign, I knew this would be the beginning of a beautiful friendship.

Last night, we decided to head into McAllen to check out another local bar that seemed to cater to our age (and musical tastes).  The GPS guided us to a side street, which just days before we had driven down, and it appeared to be deserted. Windows filled with For Rent signs and not a car to be seen; however, this evening the neon signs were lit-up, cars lined the boulevard and flocks of 30-somethings were lined up in front of dark nightclubs, where dance beats pumped through the open doors. As we walked further down the strip we arrived at the Flying Walrus – the place we had read about in a local “on the town” flyer, that we picked up at the only record shop.

We pushed past the oversize, solid wood door and sauntered up to the bar, Brad asked the bartender if we could speak with the person who books the bands. The young lady simply pointed to our immediate left, and that was when we met James As we chatted with him, we realized that this was the perfect place for us; it favored indie/original music over the same-old country songs that we’ve been hearing for the past 2 weeks. James was incredibly hospitable and gave us a tour. Out back was a huge patio, with a great stage (to be filled with acoustic performers during the week and bands on Saturday nights). As we continued to talk, he told us he had to go to this “industry party” and hastened us to follow him back inside. As we were getting ready to part ways, he showed us a flyer and told us that this was where we were going. Wait? What? James walked quickly down the sidewalk while smoking his cigarette, and Brad and I obediently followed.  We came to a stop outside of an old movie theatre, complete with a giant marquee, red carpet, and a bright neon sign that read “Cine El Ray”. Out front were a group of men (doormen and bouncers to be assumed), and James was warmly greeted. He shook their hands, pointed back to us (I smiled and waved), and the doors were opened. When we walked into the theatre the booming sounds of a band were pushing through the corridors. James was nowhere to be seen, so Brad and I followed the sound and found the band. Within a matter of seconds, James had reappeared and told us to follow him. We were led to another doorman, who secured a blue wristband to my arm and stepped aside to grant us access to a set of stairs (going up). When we reached the top, we found ourselves on the mezzanine of the old theatre, where there appeared to be a private party happening – complete with a self-serve bar, food and a keg of beer. What we soon came to realize was that this was a release party for a local music magazine. James brought us over a glass of beer and we continued to chat. What a night this had turned out to be. We stayed for about an hour (I managed to chug down 3 glasses of beer), then headed back over to the Flying Walrus to check out their band for one set. By mid-night we packed it in and headed home.

Hopefully within a few days, we’ll have a gig at the Walrus. Fingers crossed.