From Orillia to Texas 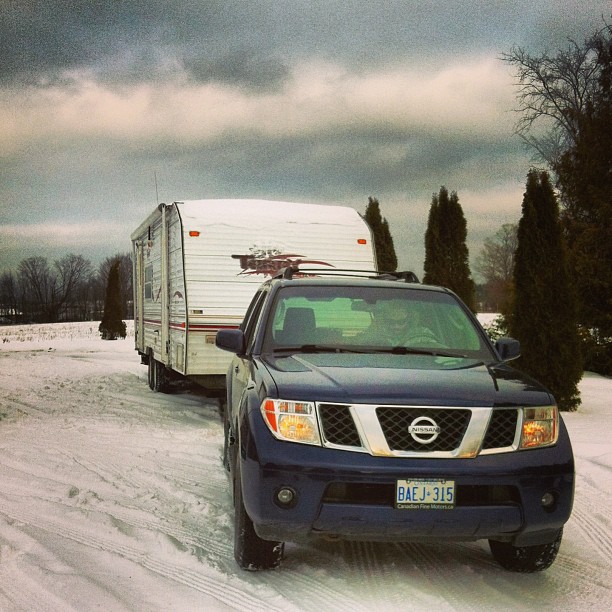 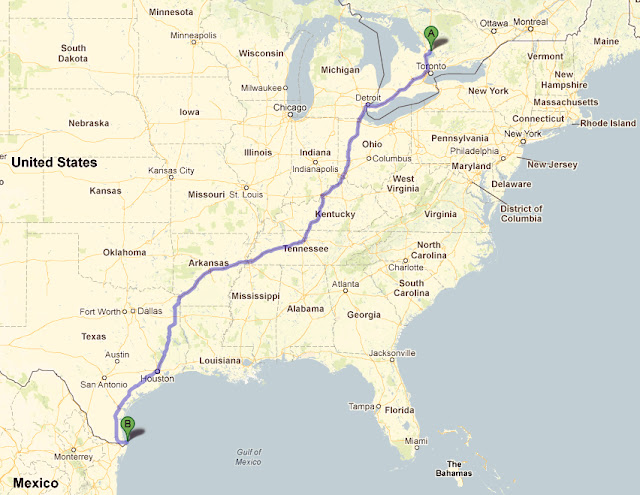 Well, we made it. Four days and 3400 kms later we finally pulled our tired little truck and trailer into an RV lot surrounded by mammoth motorhomes. The original plan was to set up camp at The Circle T Park in Mission, Texas. Sometimes plans don’t work out for a reason… and as I sit here this morning, smelling the sea air, I’m rather grateful for the change in direction.

We left Ontario last Tuesday morning, and were greeted by Eggert (a staunch, 30-something, head-shaving, presumably pick-up truck-driving and gun-toting Romney-supporter) boarder guard. Brad was rather excited to tell Eggert all about our carefree tales of how we sold our house and quit our jobs, so that we could head down to Texas for the winter. Eggert was baffled. Then suspicious. He was quite certain that we were a couple of radical Canadians who were looking to pull a fast one on the great old U.S of A. We were basically illegal aliens to him. After he looked inside the trailer, and peeked into the rear of the truck (greeted by Hank’s toothy smile and rancid breath) he said “Well, for some reason I’m gunna trust that y’all are telling me the truth. Have a good trip.”, and with that he lifted the gate and we were granted access to the country.

Our first night was spent an hour South of Indianapolis. There was still snow, but at least the temperatures were above freezing. We opted to crash in a roadside hotel for the night. At 2am I was awoken by Brad heaving up his McDonalds. We came to the conclusion that he had food poisoning.

The next morning we skipped across the Indiana state line, and into Illinois (I felt like we were driving across the Monopoly board), then Missouri, followed by Arkansas and we finally came to a stop at the Texarkana KOA to spend the night. The next morning, Brad was insistent on getting some “real food” for breakfast. I guess the boy was tired of eating granola… so it was off to Denny’s, where we were cheerfully greeted by Brenda. Brenda wore her hair back in a bun, she proudly sported thick mauve lipstick and had a penchant for calling me darlin’. She also had a slight compulsion to fill up my coffee cup each time I took a sip – “here you go darlin’, lemme just top that up”.

After breakfast we sealed up the trailer and were on the road again. We finally crossed the Texas state line and it started to feel like we are almost there. Looking at our route map this was the last leg of the journey – the final 10 hour drive (which works out to 12.5 hours when towing a 4500lb. trailer). Brad was still feeling quite shitty from his bout of McDonald’s Fever, so we decided to take it a bit easier and split the final leg in half. We pulled into a KOA just north of Austin for the night.

By morning we were recharged and happy to have warm, sunny weather. This was it – our last day in the car, our destination only 6 hours away. At 8pm we pulled up to the Circle T RV & Mobile Home park. We both just looked in silence. The lot was just off the interstate, in the middle of what appeared to be a Mexican village where skinny, stray dogs trotted happily alone down the sidewalks. We decided to be optimistic and pulled our rig into an empty lot. I jumped out of the truck to spot Brad as he attempted his first-ever trailer back-in. While I was in the middle of throwing out some awesome hand signals, from the corner of my eye I spot a large-bellied man waddling my way. “Yer parking on your pad” the man says, as he comes to a stop right beside me. “Sorry?” I say. “The pad, that’s yer patio. You wanna pull yer trailer up along-side the pad so when ye step out, yer on the patio. M’names Jerry, I live in that there 5th wheel” as he motions to the mammoth 42’ rig with a homemade deck trimmed in broken lattice, three lots down. “Nice to meet you Jerry, this is our first time ever doing this” I said. Jerry hung around until the trailer was all squared up on the lot and chatted with Brad and I for a bit. Filling us in on the many politics that make up the Circle T. When Jerry finally waddled back home, we began the set-up process again. We quickly realized that our some-what modern rig was not going to work in the Circle T’s older set-up. We decided not to unhook anything and head for the closest McDonalds to steal some wifi and look for a KOA close by. For those of you unfamiliar with KOA’s (Kampgrounds of America) they are a collection of franchised campgrounds that really set the benchmark when it comes to clean and fully-equipped campgrounds. So that’s what we did.

One match. That’s all the KOA search results gave us. One match, 156kms away, on South Padre Island. We decided to go for it. We made a reservation and were back on the road at 8:45pm. By 9:45 we found ourselves driving across an infinite causeway, and finally pulled up at the oceanfront park, king-of-all-KOA’s. After what we’ve seen at the Circle T, this place was like pulling up at the Bellagio. Row’s of $200,000 motor coaches and sleek airstream trailers, patio’s with LED palm trees and string lights illuminating parked golf carts. We felt like the Clampet’s parking our modest trailer next to them.

But in the morning we were greeted by a flock of retiree’s all-too-happy to get us set-up, and point the way to the all-you-can-eat, $3 pancake breakfast. Brad was in heaven. We filled up on fluffy, white hotcakes (I even soldiered through and ate, it was to be assumed that there were no gluten-free options), then headed to the gym (yes, a gym) to run a measly 5k on the treadmill.

And so here we are. Day 2 at the Ritz. We’re going to stay here until next Friday, while we look for a more affordable long-term option. Last night we drank our $5 12-pack of Miller while sending out a dozen emails to local bars, soliciting ourselves as the perfect happy-hour band. Within an hour, one place got back to us and agreed to meet us today. Hopefully we’ll be able to secure a few regular gigs.

My sincerest apologies for the rather-lengthy post. We’ll check back in soon.