One month down - the view from here 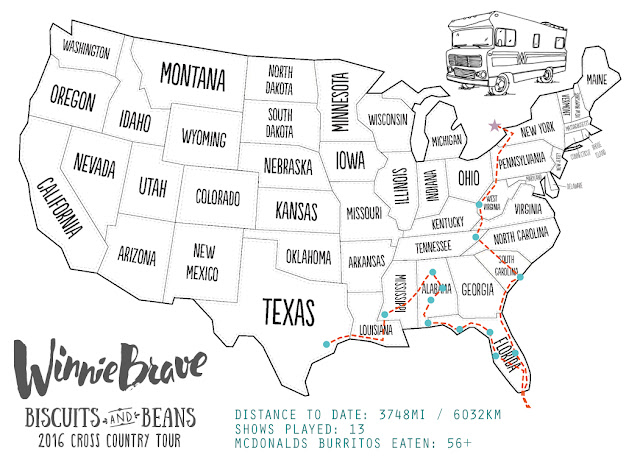 So here we are, one month into the tour and we've covered almost half the distance that we're setting out to do. The old Winnie is holding up great, the dogs have become accustomed to life on the road in their new digs and so far Brad and I have managed to stay happily married. The first leg of the tour felt a bit like a race, trying to get far enough South to escape the cold weather and not having too many days in between the shows to get into a comfortable daily routine. But February brings a bit of breathing room and a little less driving. We're camped out in Victoria, TX for the week and play a show here on Friday, then we're off to Goliad for a show on Saturday before making the drive to the Rio Grand Valley where we'll be parking it for almost three weeks.

Sometimes it feels like we've been gone a lot longer than one month. We've covered a lot of ground, visited so many interesting places and met a ton of wonderful folks. We've also drank copious amounts of craft beer, ate way too many McDonald's breakfast burritos and slept at no fewer than a dozen of truck stops along the way. So far there have been no major incidents (knock on wood) except if you count the giant tick that Hank was harbouring for a few days - the thing was the size of a raisin, so gross - but it was removed and he (Hank) seems no worse for wear.

Here's hoping the next leg of the tour (the great Southwest) brings many more adventures and interesting stories.